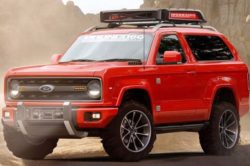 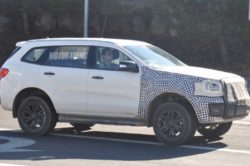 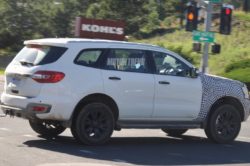 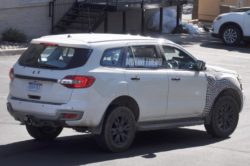 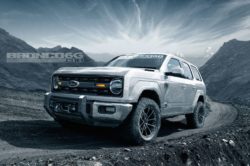 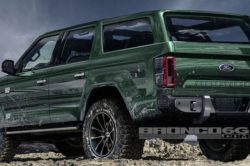 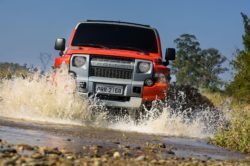 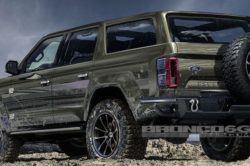 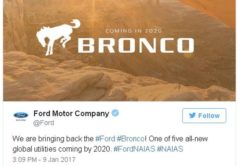 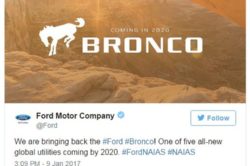 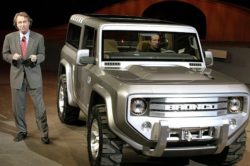 08/29/2017 UPDATE: It has been a great deal of fuss lately over the revival of Bronco’s nameplate. From 2004 concept, Ford’s open statements about it, rumors coming from all possible sides, teasing video, to first spy shots. Yes, you read that last one correctly, first spy shots of 2020 Ford Bronco emerged. Even writers from Writemyessay.today got excited. But, don’t get too excited, it is not what you are expecting to see. 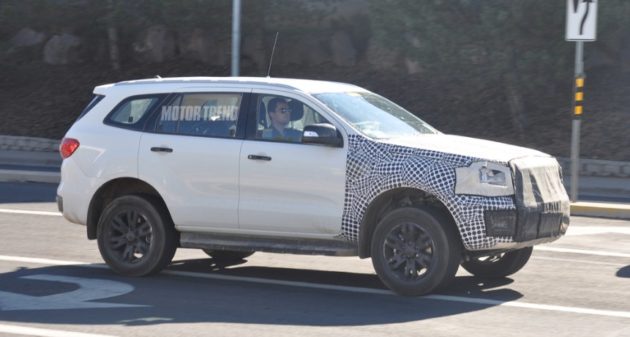 Looks of it, not

The partially covered test mule was caught testing in Michigan, but one look at it reveals the story. We are obviously talking here about Everest or Endeavour with masked fascia. Not familiar with Everest? It’s Ford’s mid-size SUV built on Ranger’s platform and primarily sold in Asia. So, what’s the deal here? First, don’t panic. Despite Bronco is going to use the same platform, it is definitely not going to be “nip and tucked” version of Everest. Further more, Ford’s executive Joe Hinrichs openly said that Bronco will stay true to its heritage, while also being instantly recognizable as Bronco. Or everything that Everest isn’t.

What’s the deal then?

Bronco is still some time away from us and it is probably early for getting out of the lab to the streets. So, this would not be the first time that some car maker during early testing uses the body of some present model to test internal bits of another one destined to arrive in future. So, why is the nose masked then? It could be due to the testing of some body parts as grille, hood or maybe headlights, that is set to appear on true Bronco. Yet, we wouldn’t bet on that, as they appear very similar to usual Everest’s deal. So, could it be Everest’s face lift? That is possible, yet not very rational as SUV in question is built in Asia and there is no logic from it roaming American streets. So, we are presumably talking about the first glimpse at 2022 Ford Bronco, the one that doesn’t reveal much as everything is on the inside, for now… And then again about that concealed front? We wouldn’t be here talking about it if it wasn’t camouflaged, right? 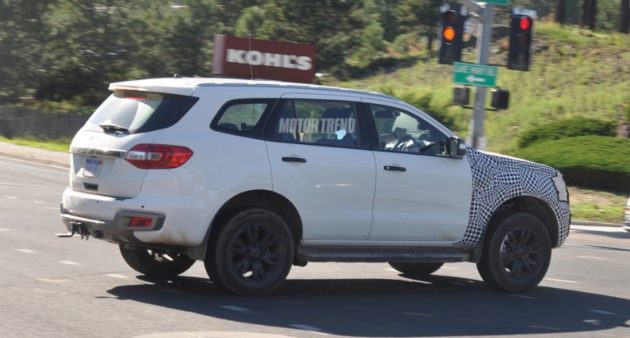 If you are late to Bronco story, we shall be kind enough to remind you of stuff that you unfortunately missed. The resurrection of famous name plate is certainty and exact model year (2020) was revealed by Ford in a video. Upcoming SUV is destined to use Ranger’s body on frame platform, meaning it stays true to traditional off-road roots. Plus, the mentioned video reveals that some serious off-road credential is on the menu, meaning that Wrangler and 4Runner are about to get some company. Then we have the whole avalanche of rumors. Allegedly Bronco is going to be influenced styling wise by Troller T4 sold in Brasil, two-door version is not planned, the roof is set to be removable, one of the engines will be twin-turbo 2.7-liter V6 and hybrid powertrain is also planned. So let’s go in order. Troller T4 is openly influenced by Wrangler, leaving greater possibility that Ford finds a unique approach with styling. Original Bronco was a two-door deal and “same doored” Wrangler sells good, so maybe “blue oval” doesn’t plan to follow that gossip. Removable roof? Bring it on! We also praise the possibility of mentioned twin-turbo V6 usage and hybrid’s chances are followed by great likelihood as stuff like Mustang and F150 are getting one. Also, most importantly, new Wrangler is planning one. For anything further be patient for two more years and prepare in the meantime likely around $30k to get one. 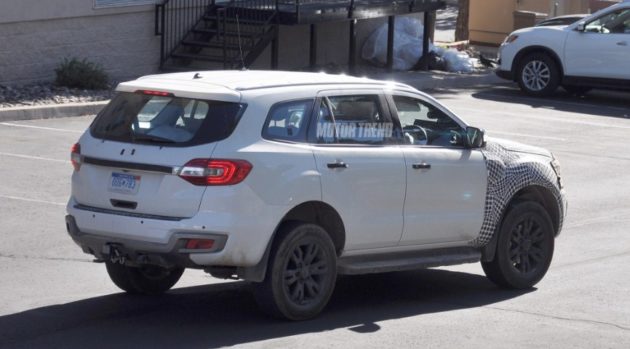 07/31/2017 UPDATE: According to the Ford Engineer, Ford is struggling to determine the direction in which the Bronco is heading. If they need any help with the upcoming SUV, they need to take a look at these renderings below. Early in 2016, renderings of what appeared to be the new Bronco were released at the new-Bronco-centric forum, and the two-door design which was shown really looked stunning. 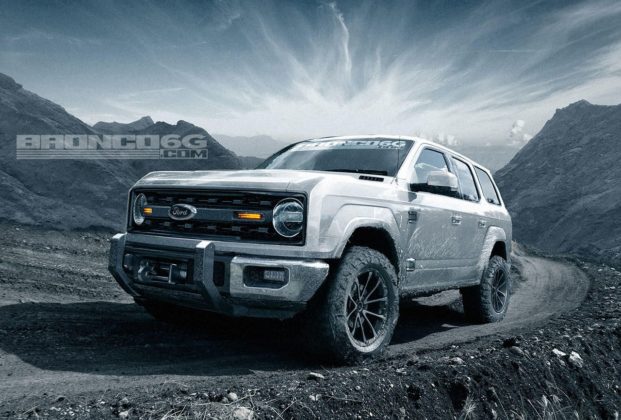 However, it has been confirmed by the insider that Ford is not going to produce the two-door model, which is sad news for the fans. Despite that, these rendering shows the four-door with a so-called “Air Roof.” It is a set of removable roof panels in which way Ford would pay homage to the drop-top Broncos which had been in the production line in the past.

While you look at these beautiful renderings, let’s see what else is there. The company’s engineer who is “closely involved with the [Bronco] project,” told Gear Patrol a lot of interesting information. Rumor has it that the new Bronco might look similar to the Troller, a vehicle which is based on the Ranger’s frame and which is offered in Brazil. Also, speculations tell us that the 2020 Bronco looks almost exactly like the new 2018 Wrangler. Could this be true? 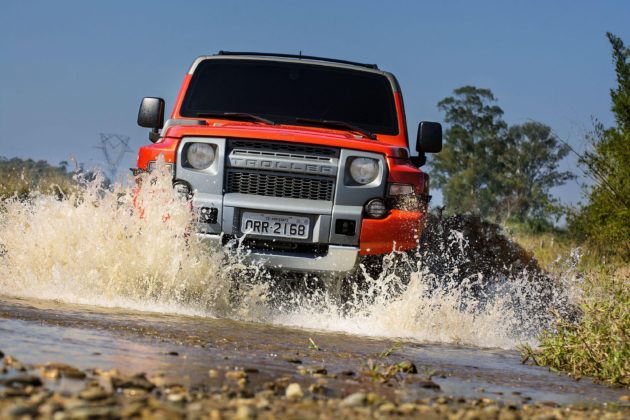 According to the insider, who preferred to stay anonymous, the answer is “Yes.” Namely, the Bronco had to enter the third design phase because it “looks too much like the Wrangler.” Usually, cars go through one phase before they reach production.

What we have hoped for and now know for sure is that the 2022 Ford Bronco will use a 2.7-liter turbocharged V6 engine which produces 325 hp and 375 lb-ft of torque in the 2018 F-150 model. Allegedly, Ford should add a hybrid version of the range, which was expected, and the company has discussed adding hybrid powertrains to the F-150 and Mustang as well.

In addition, the insider also claims that there are too many people determining the future of the Bronco. Because of that decision makers are never 100% sure what to do and it is no wonder that the car has gone through three design phases. He also says that even though the Bronco will come with basic off-road equipment, it will not be as rugged as it was in the past. The new model should be more of a mall-crawling vehicle which is going to satisfied the needs of families instead of hard-core off-roader built for aficionados who will use a 4WD to the fullest. However, this has been denied in an e-mail sent from Ford which stated: “…how it will meet the needs of our most demanding off-road enthusiasts.”

Ford has confirmed the return of their famous Bronco at the 2017 North American International Auto Show in Detroit. The Ford Bronco will make a comeback as a midsize 4×4 for 2022. They even wrote on Twitter: “We are bringing back the #Ford #Bronco! One of five all-new global utilities coming by 2022 #FordNAIAS #NAIAS”. 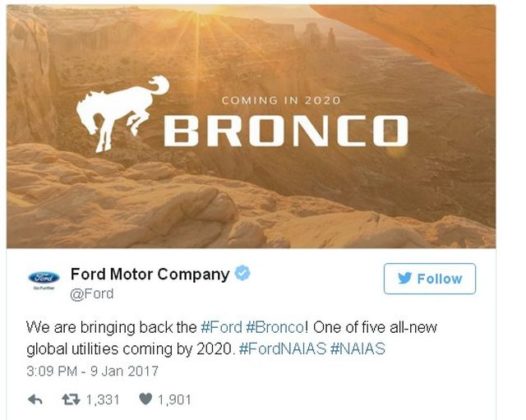 Besides the official announcement, we only have few details about the new Bronco. We don’t know the design, dimensions or the specifications and Jeep officials only showed a Bronco graphic during the announcement. According to Ford’s Joe Hinrichs, the long-anticipated 2020 Ford Bronco will be assembled at the Michigan Assembly Plant.

As Hinrichs states, the upcoming vehicle is “a no-compromise midsize 4×4 utility for the thrill-seekers who want freedom and off-road functionality, with the space and versatility of an SUV. It’s capable of conquering everything from your daily commute to gravel roads and boulders.”As he was talking, behind him were images of rocky off-road terrain indicating that the new Ford Bronco 2022 will be a fascinating off-road vehicle.

Moreover, the 2019 Ford Ranger has been announced and it should also be produced at the Michigan Assembly Plant. Is there a possibility that the new 2022 Ford Bronco will be based on the new Ranger? Let’s take a look at Hinrichs’ statements once again. He did say that the new Bronco would be a midsize off-road capable 4×4 SUV, so it might be true that it will be based on the Ranger, but this is only a speculation and we will have to wait and see what happens. 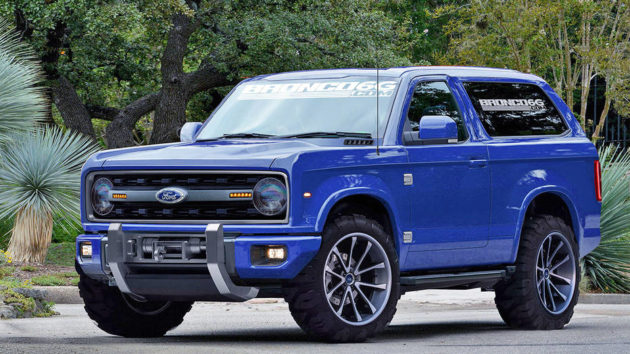 Both of these vehicles – 2019 Ford Ranger and 2020 Ford Bronco have been rumored for a long time and this confirmation put smiles to many faces in the world, not only in the US. The first time we had a chance to see the plans for Bronco and Ranger was back in October 2016 in Ford’s union contract revealed by Auto Workers representative. However, this is the first time the official announcement comes from Ford and we have no doubt that these two models will see the light of the day. By 2022 we expect to see five new vehicles from Ford, but Bronco and Ranger are the best and most important ones.

Ford’s Chief Technical Officer and Executive Vice President of Product Development, Raj Nair was also asked about the new Bronco but he was reluctant to speak of the details. However, he did say that the 2022 Ford Bronco would be different and “live up to the heritage” and that it is a “capable and confident all-rounder.” We might even see a Bronco with three-door body style, but Nair didn’t want to talk about the design, keeping the fans in the dark. Moreover, it is hard to tell where the vehicle will be launched, so we don’t know whether it will reach the Australian market.

The last time we had a chance to see Bronco hitting the streets was way back in 1996. The Ranger, on the other hand, is in production, but the problem is that it hasn’t been available in the US for some time and the American customers would love to see Ranger on sale at its home. Speaking of the powerplant, both of these cars might end up with a naturally aspirated unit or an EcoBoost. Moreover, a 3.0-liter Power Stroke V6 diesel engine is also a possibility, but we have few details to talk about the powerplant of these two cars.

In 2004 we had a chance to see a Ford Bronco concept and ever since than we have waited for news like this. When it was presented, the concept had that famous boxy exterior which reminded us of the original Bronco that was assembled from 1966 to 1977. The production Bronco will take after the Ranger, but the engineers will probably look back to the concept which is expected to borrow some details to the new model.

J Mays, Ford Motor Company group vice president of Design spoke of the concept:”True to its heritage, the Bronco concept is a tough, genuine SUV that’s all about function. It’s like a claw hammer in a box full of a department store, battery-operated, plastic, power tools.” 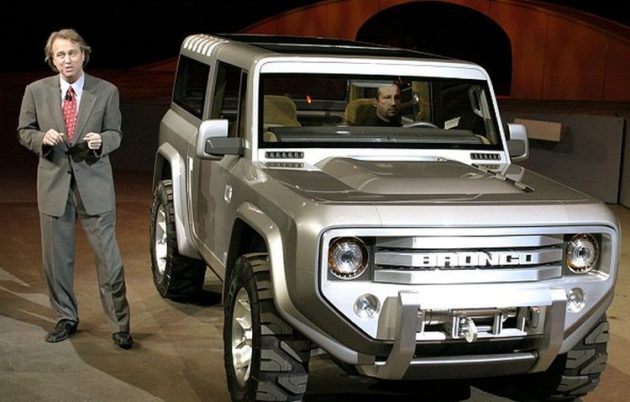 The concept does look like the original model from the 1960s but it adds modern technology. The headlamps use LED and halogen light sources while the LED taillights of the concept have a rectangular shape. The roof is interesting because it is made up of two separate sections and the driver can remove the rear portion. The concept is equipped with a 2.0-liter common-rail DuratorqTDCi engine which comes from European product range, but this engine, that delivers 128 horsepower and 244lb-ft of torque at 1,800 rpm probably won’t be in the production Ford Bronco 2022.

Mays also said for this concept:”The Bronco concept is like your favorite pair of worn, faded jeans – classic, familiar, comfortable and always in style.”

We cannot wait to find out more about the new 2020 Ford Bronco and to see how much of the original look will be retained and how Ford plans to combine modern technologies with retro design. Stay tuned for more details.