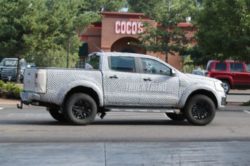 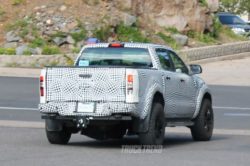 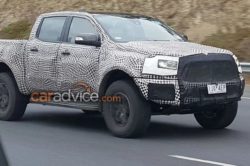 Mid-size SUV segment has been reinvigorated some time ago. And that will naturally bring some old players to the mix. We all know that Ford’s Ranger is set to sail back home, so Ram it’s your turn now. Yet, simply reintroducing Ranger might not be enough. We all crave for Tacoma TRD Pro, so either you buy it in whole, or go with regular one, satisfied with the nice consolation that base of both is same anyway. For the same reason, Colorado met ZR2 lettering and for the same reason, Ranger is not going to be just a Ranger. So, how about 2019 Ford Ranger Raptor sounds to you? 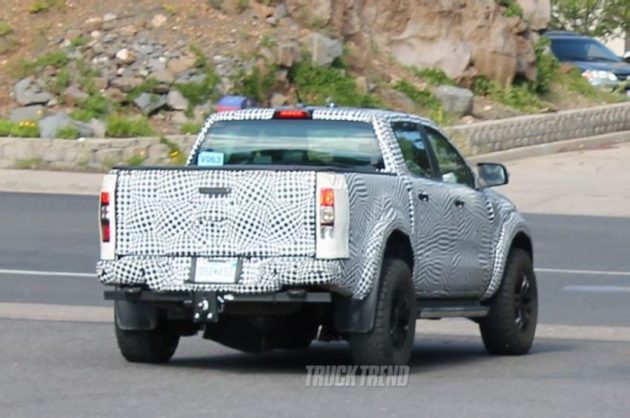 Is it actually going to borrow glorious labeling of larger and beastly sibling? Nobody is sure of, yet. Still, spy shots traveling the Internet suggest that something of that kind is intended to happen, no matter the picked name. Beefed up fenders, shaved front bumper, more aggressive fascia, raised ground clearance, chunky off road tires wrapped around actual Raptor’s alloys, all point to one. Baby Raptor might be on the way. Besides that, even new regular Ranger destined to set foot again on US soil apparently comes manlier than usual in recent years. More squared look and nothing of those fancy flying buttresses that rest of the world enjoys. Harshly cut, angular cabin at the back, attached to the bed with the visible gap is the norm here. Even those who don’t fit the story mimic it… A cough, Ridgeline… Anyway…

So, ZR2, TRD Pro, Raptor or whatever of that kind, needs to handle infinite off-road abuse. Any truck (apart from Ridgeline) is naturally resistant to different sorts of mistreating with the robust ladder frame and solid rear axles, but these trucks tend to push things above all boundaries. In that sense special approach to suspension is mandatory. Chevy turned to Multimatic and ended up with Spool Valve dampers, while this baby’s big daddy chose Fox racing shocks, as did Tacoma. Ranger in question obliviously also has something special in mind, as somebody went that far to camouflage under the body area. Which just puts us in the sweet torment of an unknown to come.

One of the best things with present Raptor is its engine. In its case twin-turbo V6 boost way more power than the same mill in civilized F-150 version. This makes special package truly special. Tacoma TRD Pro and Colorado ZR2 missed that magnificent opportunity, satisfying with regular guzzlers, so we sincerely hope 2019 Ford Ranger Raptor won’t. To keep it from interfering with “king of the hill”, feisty Ranger could keep walking pass that V6 and reach 2.7-liter V6 also helped with two turbos. The smaller unit is sufficiently spirited and in the case of usual F-150, it delivers 325 hp. For some reason, caught prototype allegedly emitted a sort of (unpleasant) diesel hum, but we are going to believe it is just for early testing purpose and a different outcome is destined to it.

Price should be in the realm of main competitors, so expect around $40k for a start or ten grand less from original name donor. That is if the name Raptor emerges as chosen. But why not, could it be any better than that?

A spicy version of new Ranger could possibly debut during next year.

Ford’s second-generation Fusion got a massive revision for 2017, and it will have to endure for at least another year …