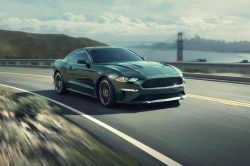 A new Mustang is always a hotly anticipated event for pony car fans, and 2019 has proven to be a truly extraordinary year for new Mustang offerings. Not only is there a new special edition Mustang, the regular models also come with lots of exciting new upgrades that have car fans itching to get behind the wheel. Here are just a few of the reasons why the 2019 Mustang is already causing such a stir:

Among Mustang fans, a lot of attention has been paid to the new special edition Bullitt Mustang being released in 2019 in homage to the fiftieth anniversary of the Steve McQueen film Bullitt. Famous for its legendary chase scenes, Bullittfeatures one of the most beloved movie Mustangs of all time — the highland green 1968 Shelby GT 390 fastback driven by McQueen’s character. The 2019 Bullitt Mustang is equipped with a V-8 engine capable of delivering 475 horsepower, and is also replete with aesthetic touches from the film, such as the instantly recognizable billiard ball tipped gearshift.

One of the reasons Mustangs are so beloved is because of their powerful, muscular approach to driving. Perfectly designed for drag racing, taking a Mustang out on an empty road and opening up the throttle is one of the most exhilarating experiences you can have behind the wheel of a car. But while many drivers who check out the latest Ford Mustang GT will immediately gravitate toward the V-8 options, it would be a mistake to overlook the EcoBoost Fastback options. Ford’s 2.3-litre EcoBoost engine powers the EcoBoost Fastback, Convertible, and Premium Fastback models, and not only does it provide gripping power, it also makes the EcoBoost Mustang a lighter, more agile ride.

Unlike luxury cars, muscle cars like the Mustang have not traditionally been marketed for their high-tech features. But with more and more drivers expecting a vehicle to come with wireless hotspots and other amenities of the digital age, Ford has steadily increased the range of electronic features available in its Mustangs. Shoppers considering the 2019 model will have access to features like Apple CarPlay and Android Auto and the latest safety tech, including a lane keeping system, adaptive cruise control, and rain-sensing wipers.

Drivers who really want to integrate their phone with their car also have the option of including FordPass, an app that allows you to remotely lock, unlock, and start your vehicle, locate your vehicle in a parking lot, and find parking and gas stations along your route.

Dedicated car fans understand that buying a Mustang is buying a driving experience. For those who are anticipating the arrival of the 2019 Mustangs, the growl of the engine and the feeling of being pinned to the back of the seat as the car’s powerful engine shifts up through the gears is what makes a Mustang worth purchasing. With a new special addition and a range of new engine and tech features, the 2019 models deliver everything a muscle car fan could want — and more.

Some of you probably remember the 2017 North American International Auto Show. Well, do any of you remember the announcement …

With a base price of just $33,000, the Mustang GT is one of the best deals around. It offers plenty …