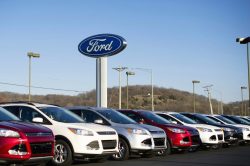 When Ford announced earlier this year that it would be discontinuing production on all but two of its car models, it created an uproar in the automotive press. What did it mean that Ford, one of the largest car companies in the world and the pioneer behind many of the best-known nameplates and brands in the industry, would cease producing legendary cars like the Focus — was it simply a bold but eccentric move on the part of new Ford CEO James Hackett, or did it portend a greater industry-wide shift? Have SUVs — which have accounted for the lion’s share of automotive sales in recent years — edged out sedans as the vehicle-of-choice for North Americans? What would the fallout of this decision be in the long-term?

In the months that followed, there has been extensive analysis as to what exactly this decision says about the state of the industry, and there has been no shortage of prognosticators happy to weigh in on what this all really means for owners, consumers, and auto plant workers. Though many still question whether or not this truly does spell the end of the sedan as a viable commercial option, the general consensus is that Ford’s decision is metonymic of the general uncertainty the automotive industry currently faces.

One thing the debate has not touched on extensively is what this means for the used car industry. The used car industry accounts for a significant number of the vehicles sold in North America every year, and while shoppers show the same predilection for used SUVs that they show for new ones, there is still a significant portion of the population that prefers sedans, and if given the choice between purchasing a new SUV and a used sedan, might well opt for the latter.

This could well drive sustained growth in the used car market as Ford fans who don’t want to trade their sedans in for the latest generation of subcompact SUVs opt to purchase used cars instead. Whether or not this will have a major impact on the price of a 2013 Ford Fusion for sale has yet to be seen, but there is a good chance that this change in market dynamics will have a not insubstantial impact on the value shoppers place on quality pre-owned models of the most popular sedans.

While it is too early yet to say what, exactly, Ford’s decision means for the rest of the North American automotive industry, there has been speculation that major players like General Motors are not far behind, and it is at least fair to say that widespread changes are coming. In addition to the sustained prominence of the SUV, the strong likelihood that hybrid and fully electric cars will become standard within the next decade is also driving uncertainty about the future of the North American market. Americans are not going to be giving up their cars anytime soon, but how those cars are powered to where they are bought will continue to be a live question for years to come.