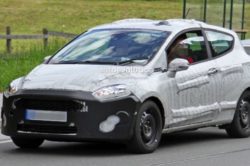 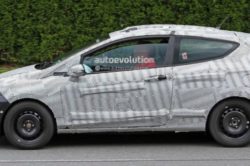 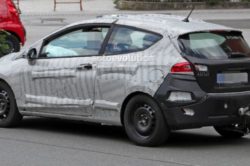 The Fiesta is Ford’s subcompact offering which has been around for more than four decades at this point. Throughout the years it changed dramatically with the latest model also being the largest. However, being released in 2008, the Fiesta started losing a lot of sales against its much newer competitors. Because of that Ford is finally working on a large update with the 2018 Ford Fiesta MK7 which is expected to debut at the Frankfurt Auto Show, next year. Until then we should expect more spy shots of the model as well as less and less camouflage on the development mules.

At this point, it still is unclear on what platform the new Fiesta is going to be built. However, we are positive that it will be larger than before. Why? Well, Ford now has the Ka+ which fits perfectly under the Fiesta as a four-door super-mini. Due to having four doors and roughly the same interior space as the older Fiesta, the new generation of the car will get bigger. We can already tell from the spy shots that it will be slightly wider, longer and possibly shorter in height as well. With that, the new 2018 Ford Fiesta MK7 should become a better all around car and not just a city vehicle. The price is unknown at this point but expects it to increase as well, especially since the Ka+ starts at roughly the equivalent of $11,000.

New Fiesta MK7 – How will it look?

So far it seems that the 2018 Ford Fiesta MK7 will have a lot in common with the latest Focus which is a bit interesting. The camouflaged prototypes have the same type of grille as the new Focus in the front as well as a very similar headlights design. However, the Fiesta does seem to look a bit sportier with a larger grille in its bumper and slightly flared wheel arches. The back also looks to have quite a bit in common with the Focus and the vertical design scheme of the older model has been replaced by horizontal lines such as the new tail lights and even a new bumper. 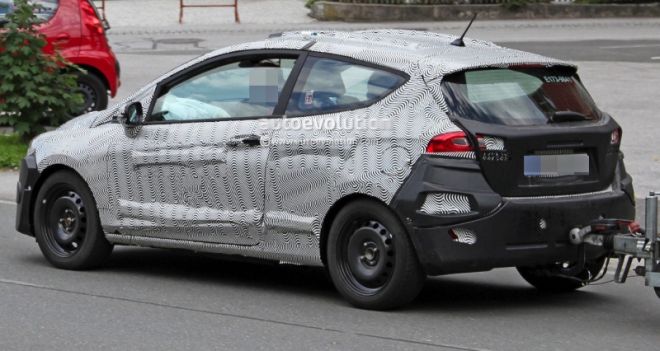 Thanks to the larger exterior size, the new Fiesta will most definitely get a larger interior as well. One of the largest problems of the ongoing model was the tall driving position which was great in the city but not so great everywhere else. The new car will very likely offer a driving position a lot more similar to its competitors such as the new Polo. This will allow for more comfortable long journeys and also a bit more control over the car. Also, Ford’s latest technologies such as the latest Sync infotainment system as well as a wide selection of safety features will definitely be available.

With most of its rivals ditching the old naturally aspirated engines, it is safe to assume that the new 2018 Ford Fiesta MK7 will do it as well. At least in Europe, the base car will likely receive an updated 3 cylinder EcoBoost 1-liter engine which should provide between 100 and 140 horsepower. Further up the range, Ford’s new 1.5 liters turbocharged diesel is also a real possibility. This time around this engine may be available with 75, 90 and over 100 horsepower depending on the model of choice. The top end Fiesta ST is also expected to debut with the base model. This will most likely feature a smaller 1.5 liter EcoBoost which is known to make over 180 horsepower. In this model, we may see as much as 200 horsepower in the base trim level. A six-speed manual should be available across the range while a new automatic should be offered as well.