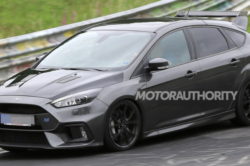 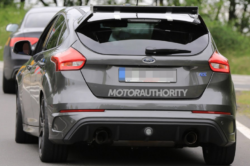 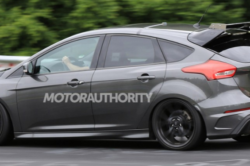 The Focus RS is an insane car which quickly became a favorite among car enthusiast thanks to its sheer performance and nearly perfect chassis. However, at least in the US, not many people know that an even crazier version of the RS has been made in the past. The Focus RS500 has been previously built in just 500 units only for the European market. This highly limited model was built at the end of the previous generation’s lifespan and it seems that this will be the case here. However, this time around things might happen a bit more differently. 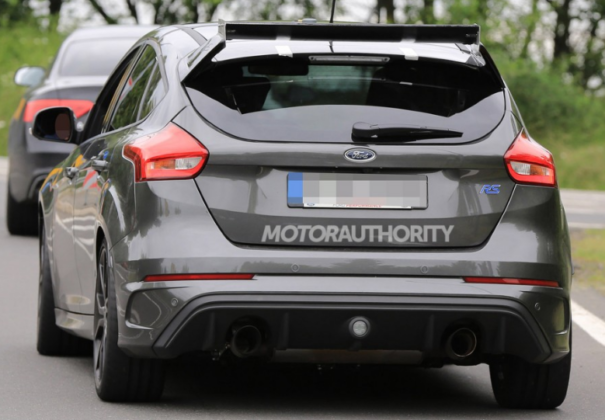 For starters, it seems that there is a 2018 Ford Focus RS500 in development. While not official, a car has been spied testing around the Nurburgring which featured all the usual RS500 bits and pieces. If it will actually be made, we expect it to land by the end of 2017 and be sold as a limited edition model which will very likely still be made in just 500 units. This time around though the car may also be offered in the US. There are quite a few different rumors about it from different sources but it seems that most of them say the same things.

2018 Ford Focus RS500 should become the ultimate edition of the current Focus. That’s quite normal, especially now when an all-new version of the Focus will be released in 2018. This RS500 should come with a lot of upgrades to its running gear. Rumors suggest that new shocks, springs, and even brakes will be installed. The test mule looked like it had carbon-ceramics which might be a bit too expensive. However, considering this will be a highly limited model, we do expect a starting price of well over $40,000. On top of that, the car should also feature better high-performance tires, forged wheels, and even a few exterior upgrades.

The test mule doesn’t reveal too much but it is quite clear that a new hood will be installed. This features air vents identical to those found on the previous RS500. Many suggested that these are there in order to extract the heat from the engine but we’re quite sure they’re just cosmetic.

The interior of the car will very likely be very similar to the regular Focus RS. Here we expect the usual Recaro seats to be offered as standard. Because it will be a limited edition model, a small plaque should be installed with the car’s number while the upholstery’s stitching should match the exterior color.

The rumored 2018 Ford Focus RS500 will very likely feature the same EcoBoost 2.3 liter turbocharged inline 4 as the regular RS. Some suggested that it would receive a 2.5-liter engine but this is highly unlikely. Instead, the 2.3-liter engine might be tuned to make close to 400 horsepower and 400 lb-ft of torque in which case it would become one of the most powerful engines per liter ever made with more than 170 horsepower per liter. This would get it quite close to the AMG A45, another insane car. The 6-speed manual is still expected to be offered with the RS500 but some also suggested for a dual-clutch gearbox. Not that long ago Ford said that such a transmission is a real possibility in the RS and it would make sense to install it on the limited edition model. This would benefit from it greatly, especially with all the extra power. Early rumors suggest a 0 to 60 MPH time of around 4.3 seconds and a top speed greater than 167 MPH. The car might get even faster than that with an automatic transmission.

With a base price of just $33,000, the Mustang GT is one of the best deals around. It offers plenty …

Despite being first muscle car in its generation, the Mustang still lacks a few core versions. In order to fill …