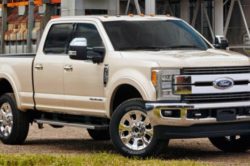 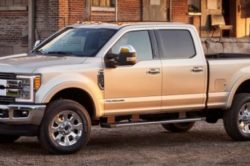 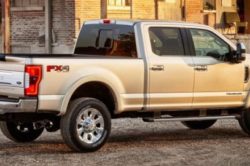 Ford’s trucks are currently holding the top position as the best selling trucks in North America and unlike some of their competitors, some of their models are also available overseas. Back at the end of 2015 Ford showcased their entire lineup of new Super Duty trucks ranging from the rather small F-250 and all the way up to the F-450. The larger models are still missing from the picture but these should be released quite soon as well. Let’s now take a closer look to the 2017 Ford F-350 Super Duty which is the middle ground between the smallest truck in the range and one of the bigger ones.

Unfortunately, the F-350 is still unavailable for sale mostly because Ford wants to finish the development of the truck before releasing it. They said that all models will become available for sale starting with the second half of this year so the F-350 is not that far away. The price hasn’t been set for now but considering all the technical improvements over the older model we expect the truck to cost around 3 to 5% more than before which would still be around the same cost as its main competitors.

One of the largest updates over the older model is the new platform the truck is using. This time around the 2017 Ford F-350 Super Duty is available with an all-new chassis which is made in the proportion of 95% out of high strength steel increasing the torsional rigidity tremendously. On top of that, this model also comes with beefed up front and rear axles, larger differentials and also bigger brakes than before meaning that it can now tow with up to 15% more than the previous version of the truck. This means that some versions of the F-350 will be able to tow in excess of 20,000 pounds which is a lot more than before and certainly a best in class number.

Aiding it to tow all that weight are the same engines that were fitted to the previous models of the range but thanks to the fact everything is a lot more durable than before and the truck is slightly lighter, it will tow with ease more than before and it will also be more efficient as well. The base engine is still the old 6.2 liter naturally aspirated V8 which will churn out 385 horsepower and 405 lb-ft of torque, enough to tow with ease little over 10,000 pounds.

If you want the entire towing capacity of the truck then the 6.7 liters turbocharged V8 diesel is the only way to go. This engine provides 440 horsepower and 860 lb-ft of torque, is more efficient than the petrol unit and on top of that, it also benefits from an exhaust brake which will be of great help while towing a trailer. A 6-speed automatic is the only available option for these engines but rumors suggest that in the near future the truck will also be available for a new 10-speed unit.

Unlike the previous model of the truck which wasn’t all that equipped with features and technology, the 2017 Ford F-350 Super Duty will feature all the great things Ford has to offer. There are six standard airbags installed, an infotainment system with a couple of connections to allow the driver to play its music and there are also a lot of new features to help even the most novice people drive the truck. A set of seven cameras is available which will offer a 360-degree view around the truck and on top of that Ford is also offering an automatic trailer steering and backing system which will make things a lot easier with all types of trailers attached to it.

The all-new Fusion has been released quite recently and unlike what many said, it actually came with a high-performance version. …